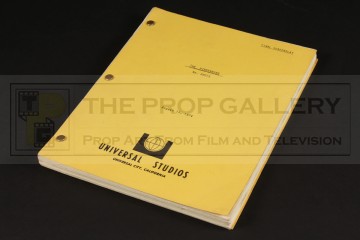 An original script used in the production of The Hindenberg, the 1975 disaster picture directed by Robert Wise.

This original production used final draft screenplay is dated August 12, 1974 and comprises of 138 pages bound between front and rear covers of yellow card with the front featuring the title of the movie 'THE HINDENBURG' and the Universal Studios logo to the bottom. The script features a quantity of revisions to the rear which are dated 10/7/74 in addition to a two page appendix with various notes, a further page to the front notes that Kessler has been renamed Ritter.