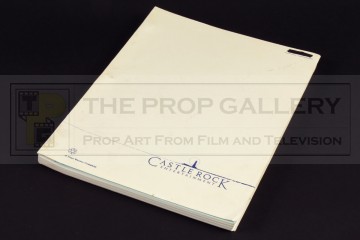 An original script used in the production of The Green Mile, the 1999 drama starring Tom Hanks under the direction of Frank Darabont.

This original production used script is dated July 4th, 1998 and comprises of 134 pages bound within front and rear covers of cream card with the front featuring the logo of production company Castle Rock Entertainment. The script features a number of blue revision pages throughout which are dated July 19th, 1988 and the blacked out name of a credited crew member to the top right of the front cover however this remains legible.