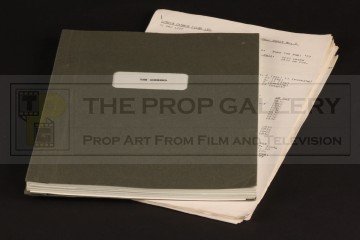 This original production used script comprises of 91 pages bound between front and rear covers of green card with the front featuring a window cut out revealing the title of the movie to the interior cover page which is hand inscribed with the number 1. The script was used during the production by assistant director Derek Whitehurst and features a quantity of hand inscribed annotations throughout, accompanied by a large collection of call sheets dated August and September 1979, totalling 23, running numbers 1 -15 & 22-30 and a unit list, these featuring numerous annotations in Whitehurst's hand.