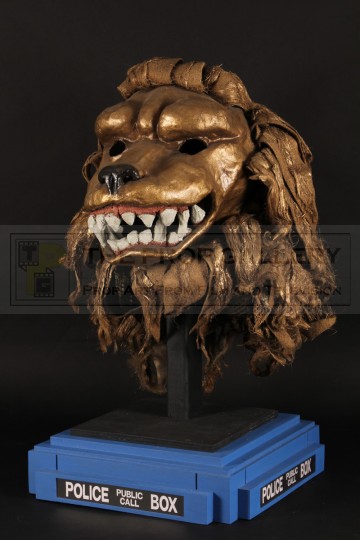 From the 1976 serial The Masque of Mandragora starring Tom Baker as The Doctor this is the original lion headdress used extensively in episode four as The Doctor attends the masque. Custom made for the serial the complex headpiece is constructed from mixed media to include a material lined pulp mâché like composite, netting to the rear with a foam mouth section the oversized mask depicts a lion with a large mane of suede material or similar dressed with hair. This represents the only example of this prop constructed for the serial.

The piece remains in largely original condition but did suffer some minor smoke damage during the famous Longleat House fire of 1996 in which a number of original props and costumes were destroyed, it remained on display at Longleat following the fire and later at the Blackpool Exhibition until its closure in 2009 after which it was sold by the BBC. As such the mask has received some minor restoration which consisted of some stabilising of the face and mouth area with some of the material and hair sections removed from the back of the head to redress the top, finally the face area was repainted to its original gold colour. The piece is now in exceptionally stable condition with no deterioration and is presented on a custom made display stand in the form of a TARDIS roof standing approximately 28" high, the actual mask measuring around 16" wide.

A rare example of original material from the Phillip Hinchcliffe era worn by Tom Baker himself this represents an displayable and unique artefact from the golden age of this classic science fiction series.