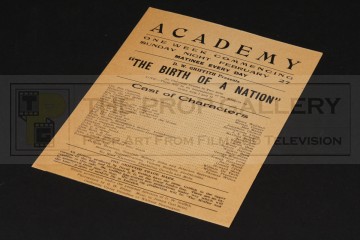 Birth of a Nation (The)

An original handbill from the release of The Birth of a Nation, the controversial 1915 silent epic directed by D. W. Griffith.

This vintage original handbill promoting the release of the movie dates to 1916 when the picture was still in its continuous first release. The handbill is printed on thin paper and advertises a one week showing at the Academy with cast credits below and information regarding the production. The dates Sunday February 27 and Sunday March 5 on this handbill correspond to 1916, significantly this was a leap year which guarantees this is from the continuous first release.

The handbill measures approximately 15.5" x 6" and remains in stunning vintage condition, folded to the centre with even toning, extremely fine.

An extraordinarily rare example of original movie paper from this early epic which despite its controversies remains a major landmark in the history of the motion picture.