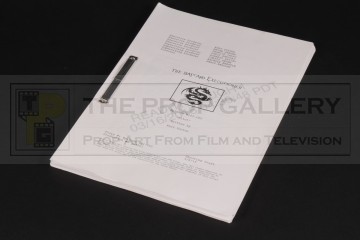 An original script used in the production of The Bastard Executioner, the 2015 drama series created by Kurt Sutter.

This original production used script for the pilot episode is dated 3/6/15 and comprises of 59 pages in addition to the front cover which features the series logo and various production details, every page of the script is watermarked 'READ THROUGH 1, 03/16/2015 04:30:48PDT'.

The script remains in excellent production used condition exhibiting only minimal edge wear from handling and some soiling to the verso.