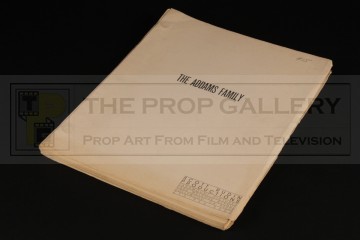 An original script used in the production of The Addams Family, the 1991 comedy directed by Barry Sonnerfeld.

This original production used second draft script is dated 7/20/90 and comprises of 116 pages bound between front and rear covers of white card with the front featuring the title of the movie and the logo of Scott Rudin Productions, additionally it is hand inscribed #15 in pencil to the top right corner.