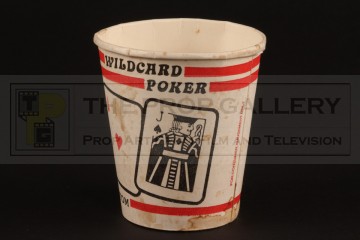 An original prop used in the production of Terminator 2: Judgment Day, the 1991 science fiction action blockbuster and the second instalment in the popular Terminator franchise.

This is an original wildcard poker cup used in the production for the scene where the security guard vends a cup of coffee in the hospital before being killed by the T-1000 (Robert Patrick). The cup is of traditional cardboard construction and features a poker game on it with a hole card printed to the base, it shows numerous coffee stains and some crushing to the bottom edge likely from where it was dropped on the floor during filming. Although it is not the exact cup seen in the final cut as the hole card to the base differs it does feature a full house hand (Aces full of Kings) with the first two cards on this cup being consistent with those on the one seen in the final cut. It is likely that multiple takes were shot during the filming of this scene and indeed it is clear that at least two differing cups are used in the final cut of the movie as the one seen in the vending machine bears a different hand to the one that is dropped on the floor.

The cup stands approximately 3.25" high and remains in good production used condition with the wear and coffee stains you would expect from use during the production.

A displayable artefact from a memorable scene of this Academy Award winning action blockbuster.