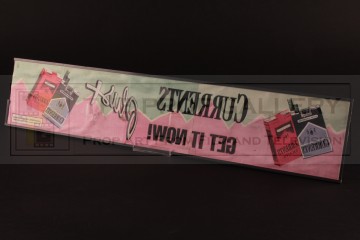 An original prop used in the production of Terminator 2: Judgment Day, the 1991 science fiction action blockbuster and the second instalment in the popular Terminator franchise.

This sign was used on the side of the bus featured in the nuclear apocalypse sequence which was filmed in miniature by Academy Award winners Robert and Dennis Skotak at 4-Ward Productions. The sign is constructed from paper covered card which is printed with an advertisement for Currents Light cigarettes and surrounded by a plastic frame, the detail on the sign is printed backwards as before shooting it was determined that the miniature effects footage would have to be horizontally flipped, this meaning that the advertisement displays correctly in the finished sequence. The sign features dried glue to the verso where it was attached to the bus and can be seen separating from the miniature during the explosion, it could be argued that this is what caused the damage to the frame which lacks a small section to one end.

An affordable and displayable artefact from this classic action blockbuster which won the Academy Award for Best Visual Effects.