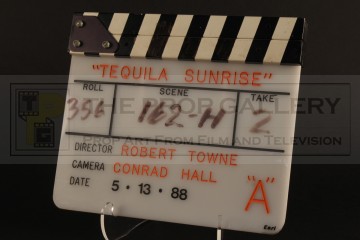 An original clapperboard used in the production of Tequila Sunrise, the 1988 thriller starring Mel Gibson, Michelle Pfeiffer and Kurt Russell.

This production used A camera clapperboard is constructed from perspex with an affixed wooden clap stick and is etched with the name of the production 'TEQUILA SUNRISE' in distinctive orange lettering. The board also bears the names of director Robert Towne and that of cinematographer Conrad Hall as camera again etched in orange in addition to a large 'A' to the bottom corner which references the camera it was used on. The clapperboard features spaces to log the roll, scene and take numbers which remain from its last use during the production as does the date 5.13.88 in applied black stickers.

The clapperboard measures approximately 11" x 9.5" and remains in excellent condition with some paint wear to the clap stick and very light surface and edge wear from production use. The wooden clap stick features three drilled holes which appear to have been made to mount the clapperboard at some point.

A fine example of the iconic clapperboard from the production of this Academy Award nominated production.