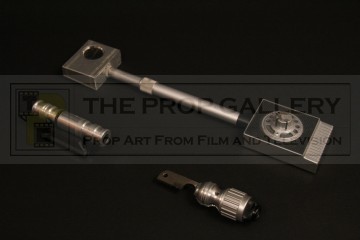 A set of original tools used in the production of the long running BBC science fiction television series Doctor Who.

From the 1982 serial Earthshock starring Peter Davison these formed part of the TARDIS tool kit utilised by The Doctor to defuse the Cyber bomb. This set consists of three tools, the Magnetic Clamp, the Magnetic Drone and the Stalos Gyro, the first two being referred to by name in Earthshock and the latter being referenced in the 1983 publication The Doctor Who Technical Manual. Following its use in Earthshock the tool kit went on to make brief appearances in other episodes and these tools can also be seen as it is used by The Doctor in the 1983 serial Mawdryn Undead.

The tools were built by the BBC Visual Effects Department and are constructed from various materials. The Magnetic Clamp has been built from a variety of sourced plastic parts and features a dial to one end with a telescopic centre section and thumb screw, the underside of the larger end contains magnets which are secured in place with filler. The Magnetic Drone is constructed of turned metal with a plastic base which also contains magnets and a quantity of filler while the Stalos Gyro is again of metal construction with plastic parts.

The Magnetic clamp measures approximately 16" long when closed with the Drone and Stalos Gyro approximately 5" and 5.5" respectively, they remain in generally excellent screen used condition.

This represents a unique set and an incredibly rare example of original hand props utilised by The Doctor himself in one of the classic serials of this long running science fiction series.