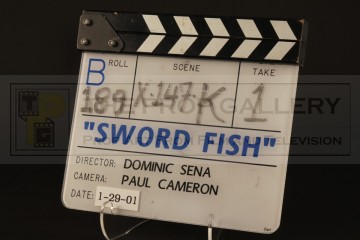 An original clapperboard used in the production of Swordfish, the 2001 crime thriller starring John Travolta and Hugh Jackman.

This production used clapperboard is constructed from backed translucent perspex with an affixed wooden clap stick and features the title of the movie "SWORD FISH" to the centre in blue lettering. The B camera board also features the names of director Dominic Sena and director of photography Paul Cameron with space to record the roll, scene and take numbers, it retains the date 1-29-01 and hand inscribed markings from its last use during the production.

The clapperboard measures approximately 11" x 9.5" and remains in excellent production used condition with some minor surface wear, generally fine, an identical board can be seen used in behind the scenes footage.

A highly displayable example of the iconic clapperboard.