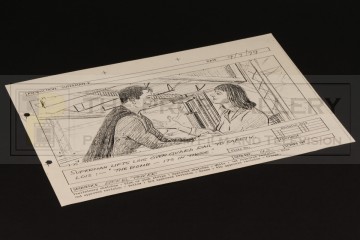 An original storyboard used in the production of Superman II, the 1980 superhero sequel starring Christopher Reeve in the title role.

This is an original production used storyboard copy taken from the original rendering which depicts Superman (Christopher Reeve) and Lois Lane (Margot Kidder) after he saves her during the memorable Eiffel Tower sequence. The storyboard is headed with the name of the production 'SUPERMAN 2' and the date 9/7/79, it features an image of Superman and Lois in the lift shaft with a description of the action below and the name of the sequence and number.