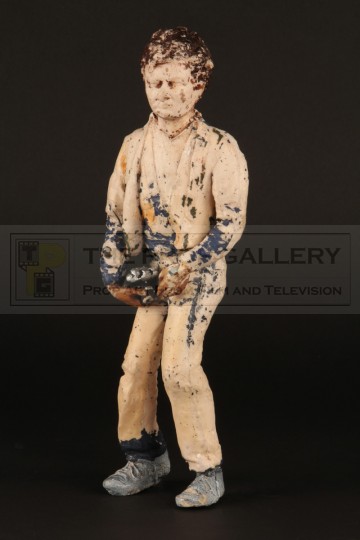 An original prop used in the production of Superman III, the 1983 superhero picture starring Christopher Reeve in the title role.

This puppet was created for use in the scenes where Jimmy Olsen (Marc McClure) climbs the fire truck to take photographs before it collapses and he is rescued by Superman (Christopher Reeve). This sequence was shot with a combination of live action stunt work and miniature effects with an insert shot clearly noticeable in the middle of the scene which this puppet would likely have been utilised in although it is not visible on screen. The puppet is constructed from silicone rubber over a metal armature meaning it could be posed in to the positions required with a paint finish to match the clothing worn by Olsen in the scene.

The puppet stands approximately 11.5" high and remains in used condition with the armature having revealed itself in various places, notably the wrists, and exhibits significant paint loss owing to the paint not adhering well to the silicone surface.

A displayable artefact from this classic superhero franchise.