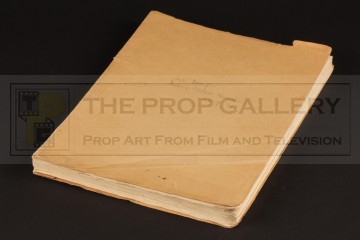 An original script used in the production of Superman II, the 1980 superhero sequel starring Christopher Reeve in the title role.

This is an original second draft screenplay written by David and Leslie Newman that replaced the previous Tom Mankiewicz draft following the production hiatus before Richard Lester took over as director from Richard Donner. Dated July 20th 1979 the script comprises of 140 pages with the final 2 being revisions dated 23.1.80, this draft contains many differences from the original script with several scenes rewritten from the original treatment. The script is bound within a front and rear cover of brown card with the front being hand inscribed '2ND Draft, David Leslie Newman, 20.7.79' in pencil.

The script remains in excellent condition with some wear and creasing to the cover and title page and further light edge and corner wear from production use.

A fine example of the Newman script which clearly saw use during the production of this superhero classic.