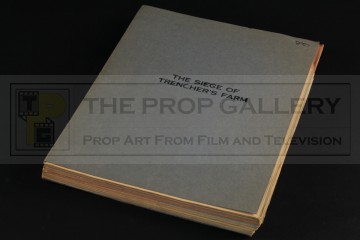 An original script used in the production of Straw Dogs, the 1971 thriller starring Dustin Hoffman and Susan George under the direction of Sam Peckinpah.

This original production used script is dated 24th November 1970 and comprises of 147 pages bound between front and rear covers of blue card with the front featuring the working title 'THE SIEGE ON TRENCHERS FARM' after the novel on which the picture is based. The script contains a large quantity of multicoloured revision pages which feature various dates throughout December, January and February 1971, many of the pages within are crossed in pen and corner clipped, a practice employed by the assistant director who utilised this script during the production to indicate that the shots have been completed, other minor hand inscribed annotations are also present.

The script remains in excellent vintage condition exhibiting some minor edge and cover wear due to production use and age, generally fine.

A very rare and desirable example of original production material from this controversial picture.