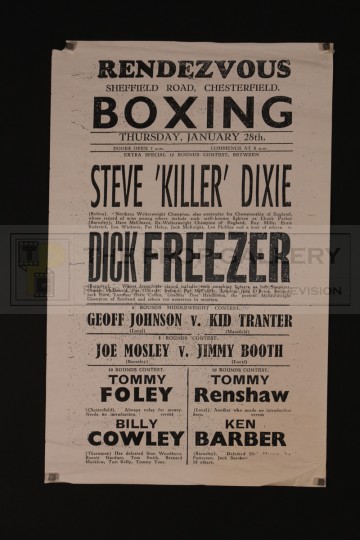 Sherlock Holmes (TV) - The Memoirs of

An original prop used in the production of The Memoirs of Sherlock Holmes, the Granada Television adaptation based on the character created by Sir Arthur Conan Doyle starring Jeremy Brett in the title role.

This boxing fight poster was custom made by the production for use in the episode The Three Gables and examples can be seen on screen inside the boxing gym. The poster advertises a fight between Steve 'Killer' Dixie (Steve Toussaint) and Dick Freezer with the undercard detailed below.

The poster measures approximately 26" x 16" and remains in good vintage rolled condition exhibiting minor paper loss to one corner and Blu Tack to the verso opposite, minor creasing throughout, otherwise fine.

An extremely rare artefact from the production of this highly regarded adaptation.