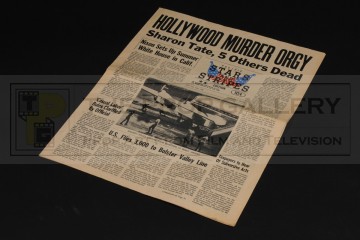 An original prop from the production of Apocalypse Now, the 1979 war epic directed by Francis Ford Coppola.

This Stars and Stripes newspaper was custom made by the production and references the infamous murder of Sharon Tate at the hands of the Manson gang, this event being referenced in the movie as Jay "Chef" Hicks (Frederic Forrest) reads a differing newspaper featuring Manson aboard the boat, one of a number of references to the counterculture inserted throughout the movie. The paper is printed on the traditional stock and comprises of a front cover featuring the headline referring to Tate followed by 14 recurring pages.

A rare example of original material from this Academy Award winning epic which is frequently regarded as one of the greatest films in the history of cinema.