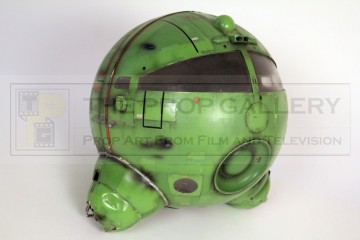 Large scale Starbug head filming miniature - Back in the Red

This Starbug head section was used on screen in the series VIII episode Back in the Red as we see the Starbug cockpit sent flying into the cargo bay where it crash lands with the crew escaping just before it explodes. With the build up of this sequence produced digitally the final scenes where the Starbug cockpit enters the cargo bag were achieved in miniature by an effects team headed up by visual effects designer Jim Francis, these sequences were filmed at Shepperton Studios in December 1998 by Peter Talbot and directed by Steven Begg.

This large scale Starbug head section is one of three built for the production by model maker Chris Trice, this being the hero screen used head, one of the other heads was cut into sections and put back together for the explosion in order to control the effect with the third and final head being an unused production made backup. Constructed in thick vacuum formed plastic, dressed with detailing and painted in the trademark Starbug green colour. The finish incorporates considerable panel detailing, decals, weathering, scorch marks and intentional leg 'damage' all achieved to an immense standard and befitting of a large scale close up prop. The head is wired to the rear to light an internal bulb intended to be seen on screen, the intactness of this interior feature is unknown.

The piece remains in excellent screen used condition considering its use with a repair crack having been glued to the rear of the head and some glue added to strengthen the leg areas, unsurprising and minor repairs given it demanding use during filming. An incredibly rigid and durable prop which survived the rigours of filming incredibly well given that it was literally thrown across the model set during production in order to achieve the effect we see on screen.

This substantial miniature measures an impressive 13.5" across the leg area with an approximate diameter of 12", it sits approximately 12" high and makes an excellent and instantly recognisable display piece.

An incredibly displayable artefact this represents the largest scale of Starbug produced for the show and is an instantly recognisable element of this cult television series.