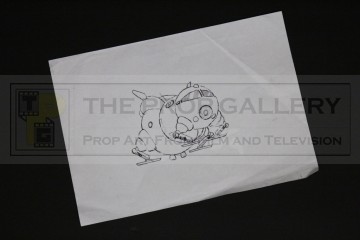 This concept is believed to have been produced by Alan Marshall of the BBC Visual Effects Department for the series V episode Terrorform whilst designing the new Starbug leg arrangement. In this episode the intention was for the Starbug legs to fold up and the tracks to emerge from the craft in one of only two times we see a major change to the Bug's design, the other being Back to Reality.

The concept consists of a production made copy of the original drawing which has had Tipp-Ex applied to the feet areas which has then been hand drawn over in pen with the new folding leg arrangement. Ultimately the effects department found the effect difficult to achieve and in the end the feet were simply stuck to the ends of the leg domes and the change was never seen.

The concept is A4 in size and remains in good production used condition with a line where it was once folded, it has since been stored flat - very fine.

An interesting production artefact from this cult television series.