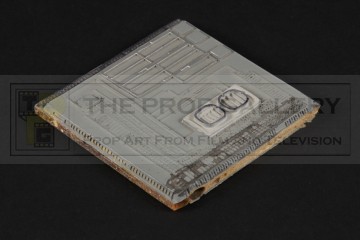 An original Death Star section used in the production of the 1983 science fiction picture Return of the Jedi, the third instalment of the original Star Wars trilogy directed by Richard Marquand.

This Death Star surface section was used during the production of the miniature effects sequences filmed in motion control by Industrial Light & Magic. This intricately detailed piece is one of a number created by ILM to dress the Death Star surface miniature, constructed from a dense lightweight biscuit foam and finished in grey paint the section features a kit part from an R2-D2 model kit. A number of tiles identical to this can clearly be seen on screen as highlighted in the black and white image.

A highly displayable miniature artefact from one of the most influential and highly regarded franchises in cinematic history.