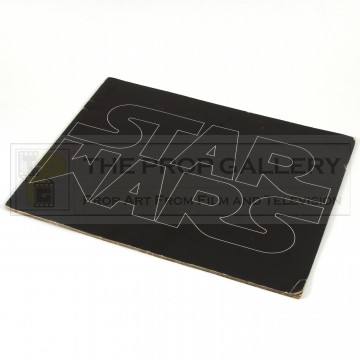 An original campaign booklet from the production of the 1977 science fiction picture Star Wars, the first instalment in the classic franchise directed by George Lucas.

These campaign booklets were sent to theatres to promote the release of the movie by 20th Century Fox, the booklet pre-dates the release of the film and features the early Star Wars logo with the pointy W which appeared on some early merchandise. The booklet comprises of 22 pages and features various information about the film, the filmmakers and the cast with full colour imagery from the movie throughout.

The booklet measures approximately 11" x 14" and remains in good vintage condition exhibiting some wear from use and handling most notably to the edges and corners, binding very fine.

A rare booklet from the early days of one of the most influential and highly regarded franchises in cinematic history.