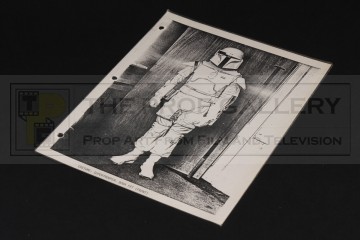 An original production bible insert used in the production of the 1980 science fiction picture The Empire Strikes Back, the second instalment of the classic Star Wars franchise directed by Irvin Kershner.

This is an original insert issued by for use in the production bibles utilised by senior production members which contained a large amount of concept designs and illustrations largely created by Ralph McQuarrie and Joe Johnston. This insert remains exactly as it was issued during the production with two pages housed back to back, separated by black paper, within a plastic folder. The images depict actor Alan Harris wearing the original prototype Boba Fett costume during the production before a number of changes were made to its appearance such as the addition of the dent to the helmet. The folder contains both front and rear shots of Harris wearing the costume which are type written underneath 'COSTUME: SUPERTROOPER - BOBA FET (FRONT)' and 'COSTUME: SUPERTROOPER - BOBA FET (BACK)' respectively.

Measuring approximately 11" x 8.5" the pages remain in near perfect original condition with the plastic folder in which they are housed showing some splitting to the edges due to age.

A fine example of an original production artefact depicting an iconic character from one of the most influential and highly regarded franchises in cinematic history.