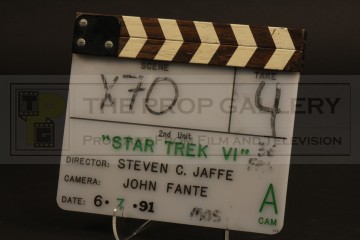 This clapperboard was ulitised during the production by the second unit under the direction of producer Steven-Charles Jaffe who was responsible for footage such as the Alaskan glacier shots used in the movie. This perspex A camera clapperboard is etched '2nd Unit' and "STAR TREK VI" in green writing, it bears Jaffe's name as director and also that of second unit DOP John Fante in addition to markings relating to scene number, take number, FPS and date from its last use which are applied stickers reading 6.7.91. The board features a wooden clapstick and has some tape to the reverse including one with B written in red marker, this would have been applied over the A if using the board for shots with B camera.

From the collection of producer and second unit director Steven-Charles Jaffe.

A very rare example of an original clapperboard from the Star Trek franchise.