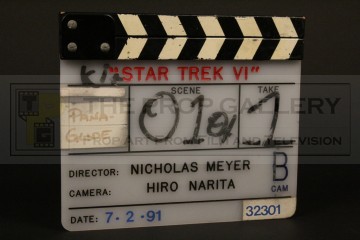 This production used B camera clapperboard is constructed from perspex with an affixed wooden clap stick and is etched with the movie title 'STAR TREK VI' in red lettering. The board also bears the names of director Nicholas Meyer and that of noted Japanese cinematographer Hiro Narita as camera etched in black lettering and retains the scene and take numbers from its last use on the production in addition to the date which is applied in blue stickers. Further to this the clapperboard features tape applied to the front which is hand inscribed 'PANAGLIDE' and another to the verso inscribed 'STEADI' referencing types of camera used in the production. This represents a fine example of the iconic clapperboard and an identical once can be seen in the final behind the scenes image presented here.

The clapperboard measures approximately 11" x 9.5" and remains in excellent condition with some paint wear to the clap stick and light surface marks from production use.

A rare and desirable example of an original clapperboard from the Star Trek franchise.