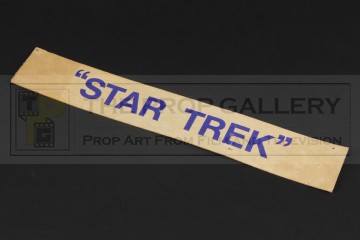 Star Trek: Planet of the Titans

An original sign from the production of Star Trek: Planet of the Titans, the 1970s unproduced motion picture based on the classic television series created by Gene Roddenbury.

This door sign hails from the production of Star Trek: Planet of the Titans which was planned as being the first motion picture based on the Star Trek television series circa 1976. The picture was planned to be filmed in the United Kingdom and was ultimately abandoned in 1977 for a number of reasons however a quantity of pre-production work was completed including designs by several notable individuals which were attached to the project including conceptual artist Ralph McQuarrie (Star Wars), production designer Ken Adam (James Bond, Dr. Strangelove) and miniature effects designer Derek Meddings (Thunderbirds, James Bond, Superman).

This door sign was used on the production office which was set up at Pinewood Studios during pre-production of the movie, printed on cardboard the sign reads "STAR TREK" in bold blue type and features a number of pin holes, when the production was abandoned it was retained by miniature effects designer Derek Meddings from whom it was obtained many years ago, a note to the verso which is hand inscribed in pencil relates to this.

An incredibly rare and unique production artefact from the Star Trek franchise.