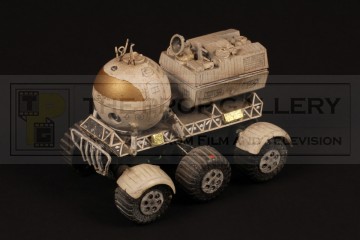 The moon buggys for the series were designed by BBC visual effects designer Mike Kelt with miniatures created in two scales for production with this smaller scale miniature built by Melvyn Friend of the BBC Visual Effects Department. Constructed from various materials to include a wooden chassis which houses three axles incorporating plastic Viking Toys wheels dressed with production made wheel fairings of plastic, front and rear grill sections. The base with white tape detail and gold block dressing supports the control area, of hollow plastic, with integral bulbs (non functional) with painted gold window, the rear, of carved wood is dressed with numerous kit parts, this whole upper section of the miniature is further detailed with pencil markings to mirror the markings of the larger miniature. Beautifully detailed throughout the miniature is a testament to the level of talent within the BBC Visual Effects Department. The final images in the gallery show effects designer Mike Kelt dressing the set with this very buggy before a take.

This impressive miniature remains in excellent production used condition with some minor detailing missing, most notably three of the wheel fairings. The buggy measures approximately 4.5" long, 3.5" wide and stands 3.75" at its highest point.

A beautifully made and very displayable artefact from this cult science fiction series.