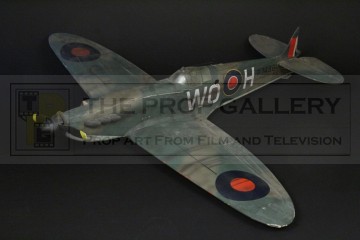 An original Spitfire miniature from the production of Over Here, the 1996 BBC drama penned by John Sullivan.

This Spitfire filming miniature is constructed from wood and started out life as a remote control model which was acquired by the BBC and modified for use on production. The aircraft sports a custom paint job which was done by a BBC Visual Effects team lead by designer Andy Lazell creating this detailed miniature which was shot on the model stage at BBC Western Avenue.

The Spitfire measures a very impressive 37" in length with a wingspan of 44" and is in fair screen used condition sadly lacking the motor and cover to the nose, a section of tail with some cracking and small hoes to the body.

A displayable miniature of this 20th Century icon from this highly regarded BBC series.