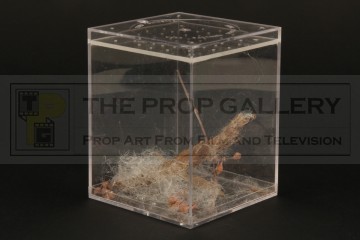 An original prop used in the production of Spider-Man, the 2002 superhero picture starring Tobey Maguire, Willem Dafoe and Kirsten Dunst.

Spider cages such as this can be seen early in the movie as Peter Parker (Tobey Maguire) visits the genetic research laboratory where he is bitten by the spider as he photographs Mary Jane Watson (Kirsten Dunst). Constructed from plastic the box contains twigs, leaves and dressing intended to simulate a habitat for the genetically engineered spiders, the realistic prop even features a number of air holes to the top.