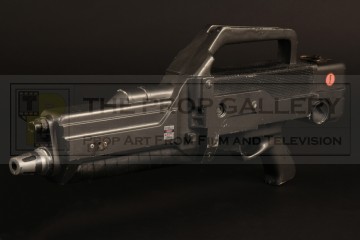 An original prop blaster used in the production of Space Truckers, the 1996 science fiction comedy directed by Stuart Gordon.

This prop blaster is one of a number built for and used in the production. Constructed in fibreglass resin the weapon features a laser pen fixed to the end which would have acted as the laser sight, this appears to be controlled by a button to the side of the blaster. There is a small hole underneath where a power pack would have been inserted during production to power the laser. The weapon also features two metal eyes riveted to the body where the shoulder strap was attached, it is finished in black and grey paint simulating a metallic finish with applied decals.

The weapon measures over 24" long and is a substantial prop which has considerable weight to it.

A sizeable and displayable artefact from this light hearted science fiction comedy.