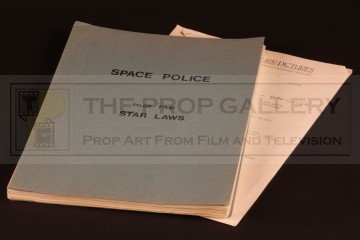 An original script used in the production of Space Police, the 1986 pilot film produced by Gerry Anderson of Thunderbirds fame.

This is an original script used in the production comprising of 105 pages in addition to set and cast list pages bound between front and rear covers of blue card with the front featuring the title 'SPACE POLICE, STAR LAWS'. This script was issued to and used by assistant director Derek Whitehurst and features his name hand inscribed to the top of the cover page with highlighter pen throughout and some minor hand inscribed annotations. The script is accompanied by an original staple bound five page unit list on Anderson Burr Pictures headed paper which contains contact details for the various crew members and a memo from Gerry Anderson regarding script changes, these dated April & May 1986 respectively.

The script remains in excellent production used condition throughout with minor toning to the covers and a small tear to the interior binding fold, the accompanying paperwork very fine with only minor edge wear.