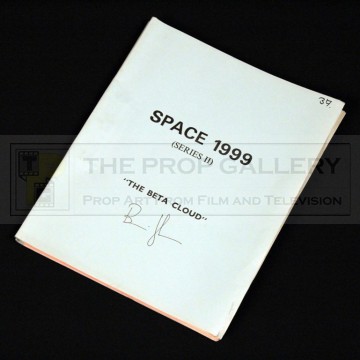 This is a production used script for the series 2 episode The Beta Cloud. Written by Charles Woodgrove, this is actually a pseudonym of series producer Fred Freiberger. This is the final shooting script and is dated 11th June 1976.

Originally used at the Bray Studios SFX department the script consists of 64 A4 pages bound within a wraparound cover of blue card.

In addition it has been signed by and was obtained directly from academy award winning special effects expert Brian Johnson who was responsible for much of the ground breaking model effects work on the series.