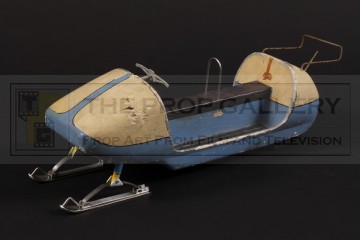 From the episode Breakout this is an original snowmobile used prominently by Joe throughout aided by the brain patterns of an Olympic bobsleigh champion. This vehicle was built in two scales by the talented Century 21 visual effects team headed by noted designer Derek Meddings, a puppet scale version on which the puppets could be seated for use in close ups and static shots with a smaller version used for wide shots and those of of it travelling along the model set. This is the latter, expertly constructed from jelutong wood the vehicle features a blue and white paint scheme and is wonderfully detailed with a handmade steering bar of metal and rack to the rear, the green star logo which belongs on the side has fallen off at some point and been incorrectly replaced below the handlebars. To the underside the miniature features two holes in to which Jetex motors could be placed, this was the ingenious solution used by Century 21 to create the snow movement effect seen as Joe travels along the terrain, the wear from their use visible today. The skis to the front were originally missing and are expertly fabricated and highly accurate replacements as is the central handle, otherwise the miniature is in original condition.

The main body of the miniature measures an impressive 16" long, it remains in good vintage screen used condition with some damage to the wood, paint cracking, lacking minor parts such as the front lights and tape detailing, none of this detracting from what is really an excellent original example of a Century 21 filming miniature.

This represents a fine example of an original Anderson series filming miniature of which very few remain in existence today, a highly displayable and incredibly rare artefact from this highly regarded production.