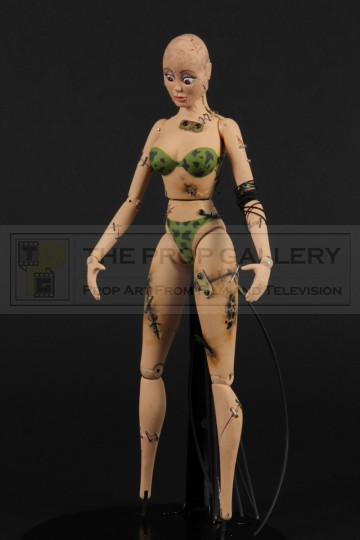 Gwendy dolls such as this can be seen prominently on screen as Christy's (Kirsten Dunst) dolls are turned into auxiliaries of war, this achieved using a combination of live action puppets built by Stan Winston Studios and computer generated imagery provided by Industrial Light & Magic.

This Gwendy doll is an original built by Stan Winston Studios and can be screen matched to the laboratory sequence which was achieved using these live action puppets. Constructed from resin with a silicone head the doll features various points of articulation with animatronic cables to the rear, the highly detailed puppet is custom painted and distressed to appear battle damaged with burn marks, scarring and hardware repairs present. In addition to being able to screen match this doll by its unique damage to the aforementioned scene it can also be spotted in a behind the scenes photograph of the cast created by Stan Winston Studios.

The puppet stands approximately 11" high and remains in very good production distressed and screen used condition, much of the damage intentional with feet seemingly lacking on screen, overall fine.