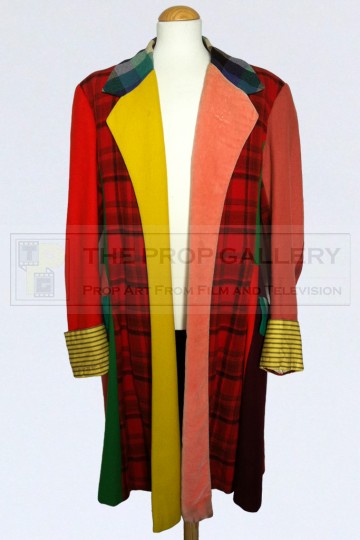 An original frock coat used worn on screen by Colin Baker as The Doctor in the long running BBC science fiction television series Doctor Who.

In 1984 Peter Davison announced his retirement from Doctor Who and was replaced by Colin Baker who was to become the sixth incarnation of the famous Time Lord. With each incarnation of the character having a signature dress sense series producer John Nathan-Turner opted for a deliberately colourful ensemble, against the wishes of Baker, which was both tasteless and garish.

The costume was designed by Pat Godfrey with three frock coats made for the series by theatrical tailors Arthur Davey of Covent Garden, London. Two were created for the first season and this third coat was made for season 23 and used extensively in studio filming throughout The Trial of a Time Lord serial. The coat is constructed in a patchwork style with clashing coloured panels of various material to include wool and velvet with yellow and pink lapels and yellow cuffs which were created in the same pillow ticking as the trousers. This particular frock coat has numerous tells which make it possible to differentiate from the others and screen match to the vast majority of studio filmed scenes in The Trial of a Time Lord season, it was also used in various publicity shots such as later Radio Times covers as it was gifted to and retained by Colin Baker himself after production.

The coat remains in excellent screen used condition with only minor holes to the pink lapel where the famous cat badges were pinned during the production.

An incredible display spectacle, this represents one of the most famous and instantly recognisable costume elements from this cult science fiction series.