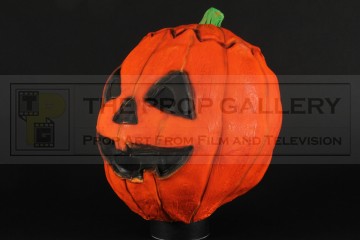 An original mask used in the production of Halloween III: Season of the Witch, the 1982 horror picture directed by Tommy Lee Wallace.

This is an original jack o'-lantern mask as produced in the movie by Silver Shamrock Novelties and used as an integral plot device throughout. The skull, witch and jack o'-lantern masks used during filming were supplied to the production by noted makers Don Post Studios who used a skull and witch from their already extensive catalogue and created the jack o'-lantern specifically for the production in the process retaining merchandising rights as part of the contract.

The jack o'-lantern mask is moulded in latex rubber and finished in day-glo fluorescent orange with a green stalk to the top, the eye, nose and mouth areas in contrasting black with the former and latter featuring holes cut and backed with a black mesh material which remains present to only one eye. To the back the mask features subtle copyright details '1982, DINO DE LAURENTIIS CORP, A DON POST TRADEMARK', such markings can briefly be spotted on screen. The mask was foam filled by a previous owner for display purposes as it had been stored flat since the production with a fold line running across the face, this is now barely visible.

The piece measures approximately 9" wide and stands around 12" high, it remains in generally very good production used condition with absolutely no deterioration to the rubber material and exhibits only minor paint wear from age, use and handling.

A significant, recognisable and highly displayable artefact from this cult science fiction horror.