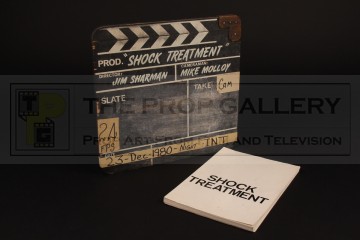 An original clapperboard and script used in the production of Shock Treatment, the 1981 black comedy musical directed by Jim Sharman.

This production used traditional style black wooden clapperboard with hinged clap stick bears the movie title 'SHOCK TREATMENT' in addition to the names of director Jim Sharman and director of photographer Mike Molloy as cameraman. The main unit clapperboard has spaces where the slate number, take number and date could be marked for reference and exhibits some heavy signs of chalk residue from use during the filming. The board features tape to the bottom which is hand inscribed with the date '23rd-DEC-1980 from its last use during the production and to the verso features various other tapes retained for further use in addition to a pattern from a lens testing chart.

The clapperboard is accompanied by and original production used script comprising of 106 pages in addition to lists of the cast and musical numbers bound between front and rear covers of glossy white card. The front cover of the script features the name of the movie in large black lettering with the interior title page of the script bearing the stamp of cinematographer Mike Malloy whom this script is believed to have been issued to during the production.

The clapperboard measures approximately 15" x 14" and remains in good condition with edge and surface wear consistent with heavy production use, the accompanying script remains in excellent production used condition throughout with some minor wear to the front and rear covers, overall very fine.

An impressive collection of original production material from this cult picture.