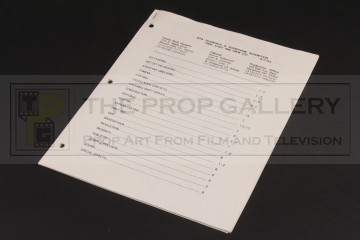 An original crew list from the production of The Shawshank Redemption, the 1994 prison drama starring Tim Robbins and Morgan Freeman under the direction of Frank Darabont.

This original crew list issued during the production contains addresses and contact details for the various members of the production and executives at Castle Rock Pictures. Headed with the title 'Rita Hayworth & Shawshank Redemption' after the Stephen King novella on which the film is based the document consists of eighteen pages bound by a staple to the top corner and is dated 9/7/93. It remains in excellent condition throughout with some print transfer to the verso of each page, overall fine.

A rare and concise production artefact from this Academy Award nominated and critically acclaimed masterpiece which is frequently regarded among the best pictures of all time.