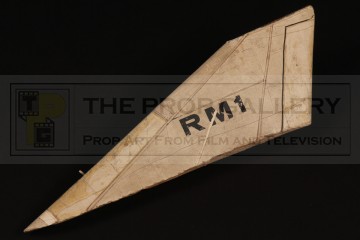 An original miniature section used in the production of The Secret Service, the 1969 Supermarionation television series created by Gerry & Sylvia Anderson.

This is the original tail fin from the Royal Muldova aircraft filming miniature on which a bomb is hidden becoming a central plot device in the episode May-Day, May-Day! Constructed from hand carved jelutong wood, painted and detailed with automotive tape, biro panel lines and RM1 decals. This rear tail fin is believed to be the only surviving piece from the original filming miniature the fate of which is unknown, presumed destroyed, and can be positively screen matched by a number of defining features.

The miniature measures approximately 10.5" long and remains in good condition with some cracking and discolouration to the paint and tape peeling, one side lacking the R and most of the M decals.

An extremely rare and displayable miniature artefact from this classic Anderson production.