When it comes to collecting original film and television artefacts one thing is always paramount, authenticity, or provenance.

1. mass nounThe place of origin or earliest known history of something.
1.1.count noun A record of ownership of a work of art or an antique, used as a guide to authenticity or quality.

In a hobby fraught with items of dubious authenticity purchasing pieces from trusted and reliable vendors is key as is the correct attribution of what the piece is, there are a number of categories which things can fall into and many collectors have their own scales to grade items and differing beliefs on what they mean, for example common terms include 'production made' and 'screen used'. The purpose of this article is not to pick apart the specific and sometimes debated meanings of the various terms but to concentrate on the one which stands head and shoulders above the rest. Screen matched.

Any artefact is, by definition, screen matched if it can be categorically matched to the one seen on the screen. This is achieved by matching up markings on the piece which are consistent with the one seen on screen, for example any unique marks, damage, paint work or where wardrobe is concerned the pattern, cut or any staining to the costume. A common misconception is that if an item is screen used it can be screen matched, in fact being able to screen match a piece is in reality incredibly rare and in most cases a piece that is likely used on screen cannot be matched. This can be for any number of reasons, one of the main issues, which is particularly relevant to older productions, is the quality of the film footage and lack of definition. Another common reason is that there is more than one of a particular piece on screen and there is simply nothing to distinguish between them.

The screen match is highly coveted by collectors and the reason for that is simple, it is irrefutable evidence that the piece is authentic and better still guaranteed to have been used on screen, in short it is the ultimate provenance. There is something special about knowing for absolute certain that your prop or costume has been used by or worn by your favourite actor or actress and being able to point at the television screen and know for certain that a particular piece is actually the one you own.

Below is a case study detailing the screen matching of a wardrobe piece, in this case the jacket worn by Robert De Niro as Rupert Pupkin in the 1982 picture The King of Comedy. This is the key costume piece from this underrated De Niro and Scorsese collaboration and following detailed analysis it has been possible to screen match this jacket to the one worn by De Niro in the movie, furthermore is is clear that it is this very same jacket in every scene this particular costume combination is worn and so it can be stated, without doubt, that this is not only a screen matched jacket but the only jacket of this style worn on screen. 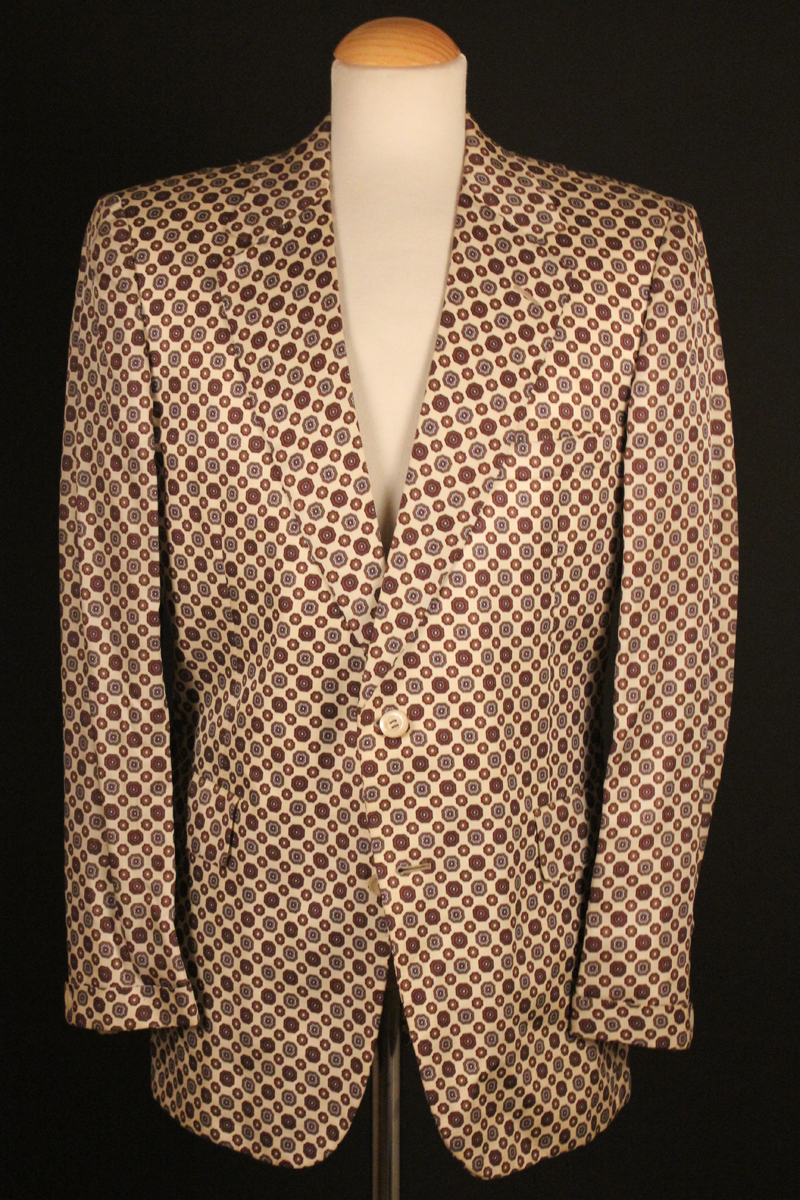 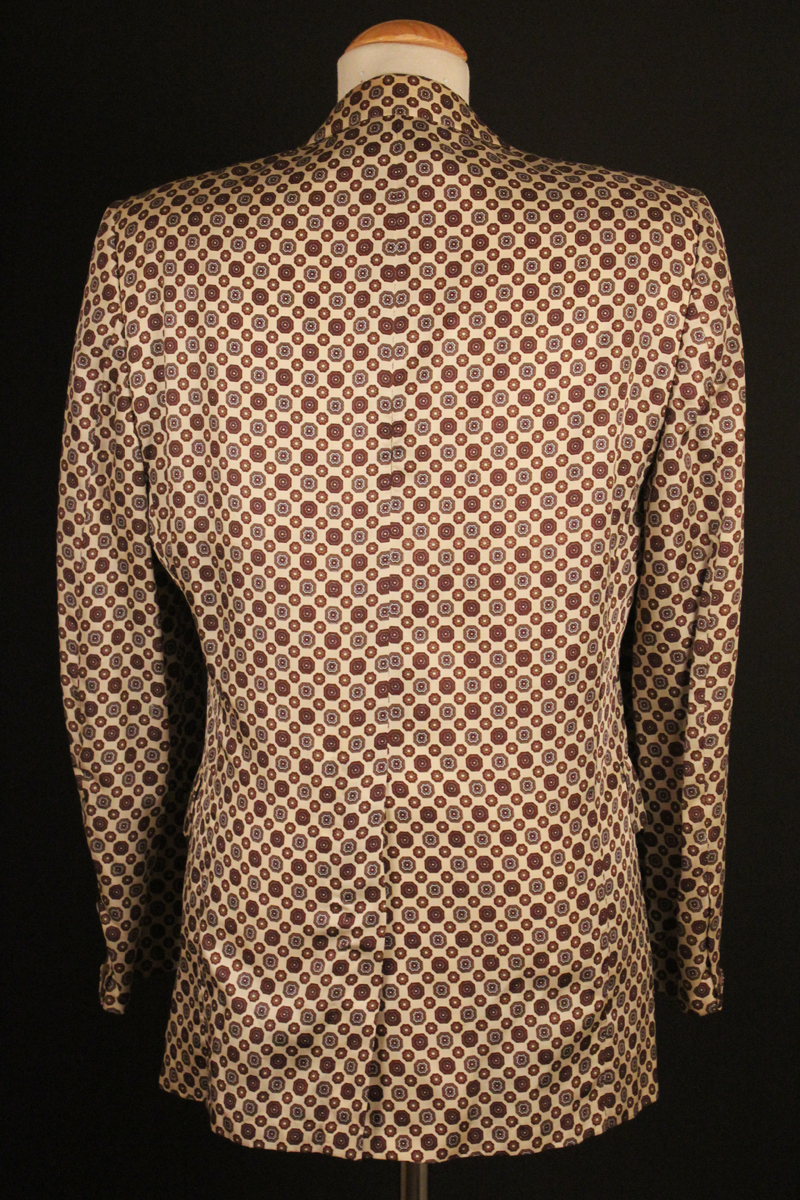 The jacket worn by Robert De Niro as Rupert Pupkin in Martin Scorsese's 1978 black comedy The King of Comedy. 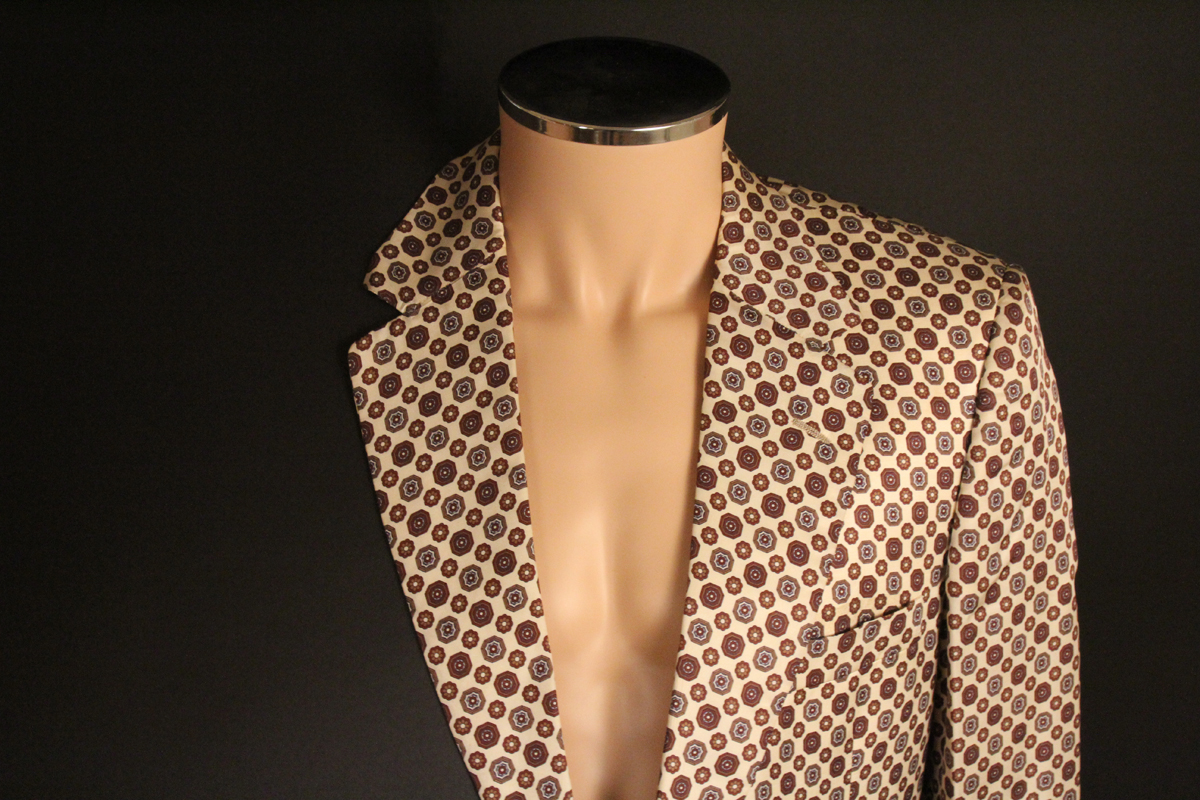 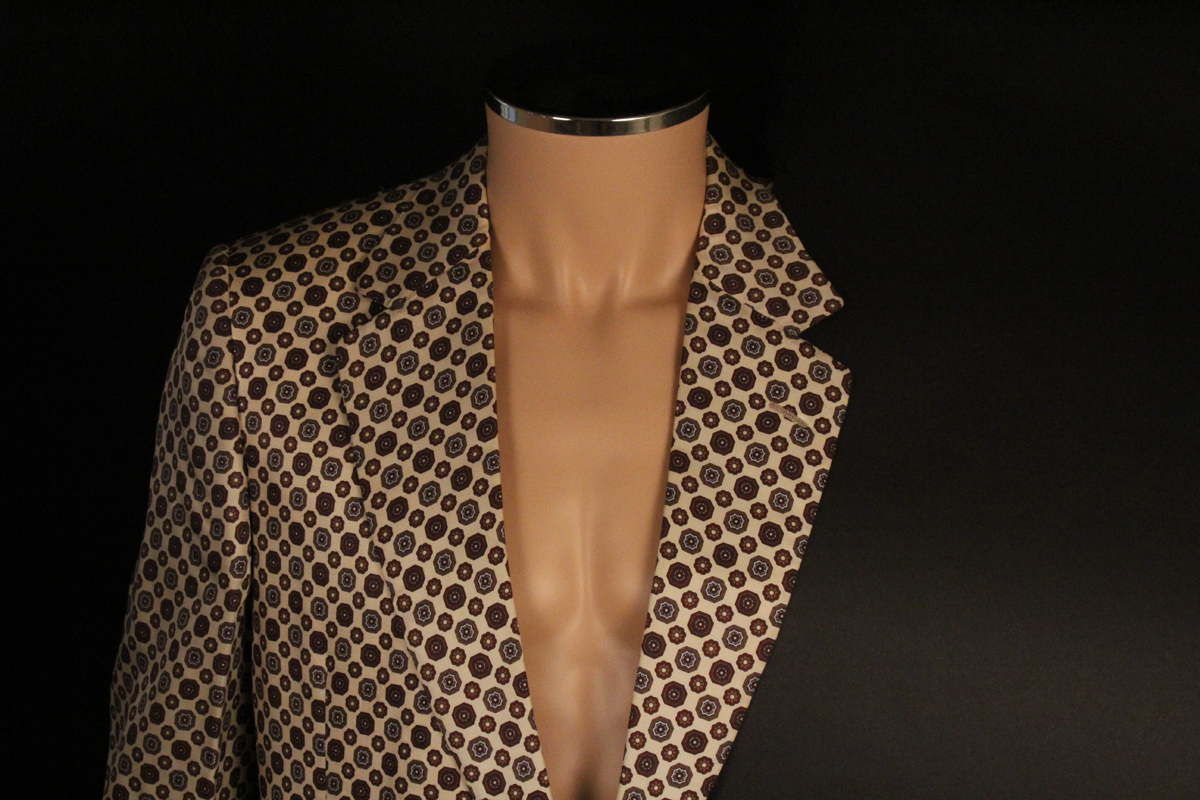 The outrageous pattern of the jacket provides a good starting point so let us first take a look at the lapels, specifically the cut across the pattern on the lapel edges. To make this clearer the jacket has been photographed with a black background placed under the lapels to more clearly define the pattern along the edges. 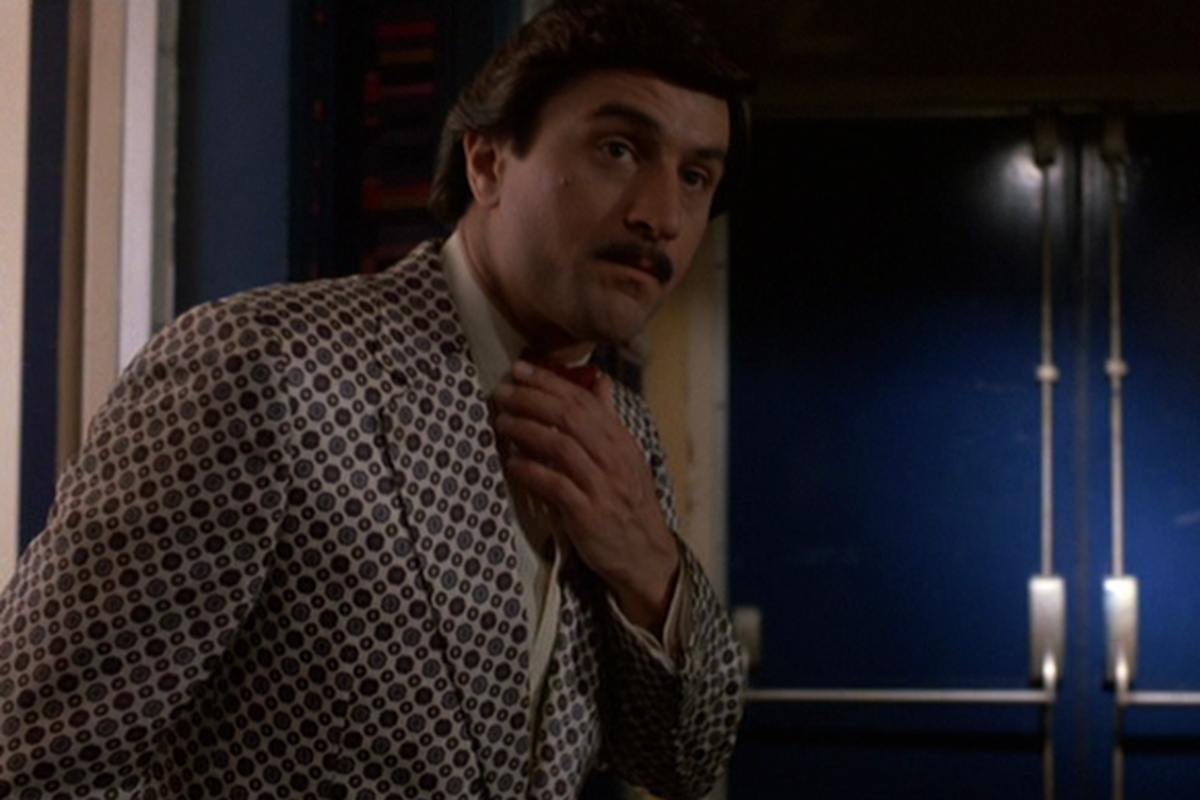 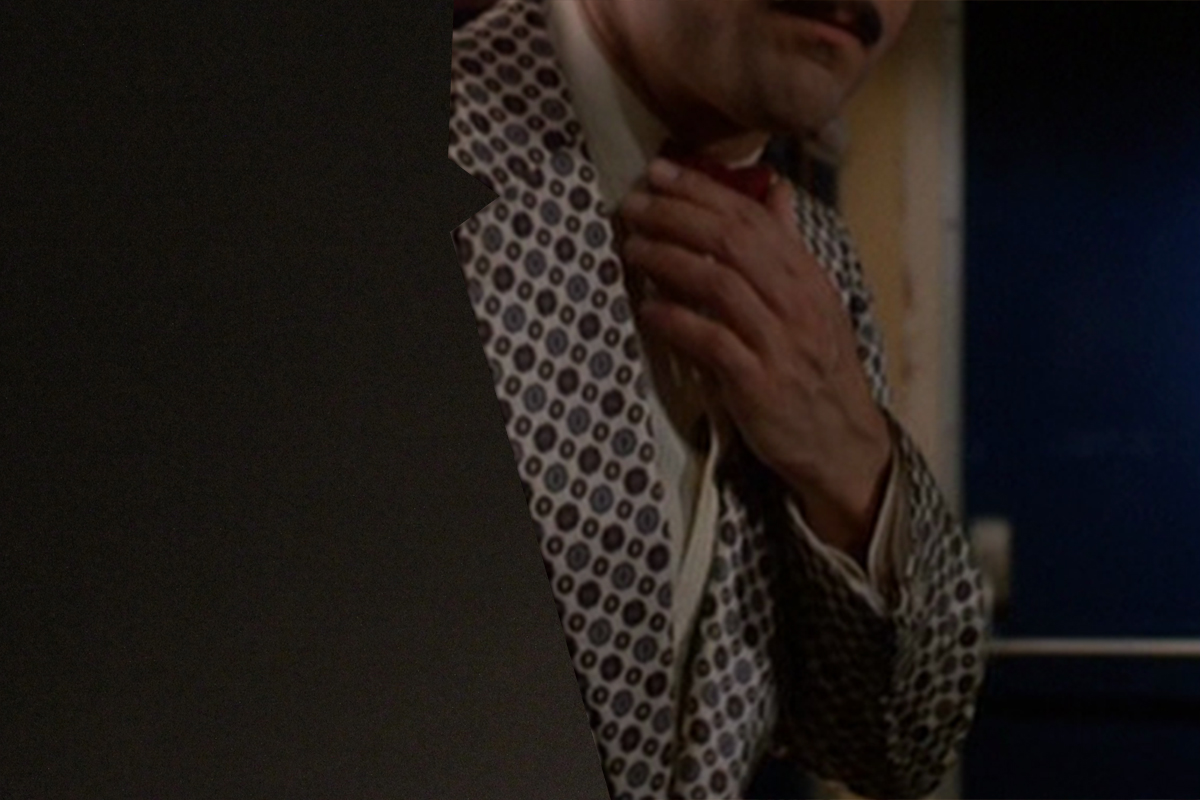 Next we source some screen captures of Robert De Niro wearing the jacket on screen. The capture is then enlarged slightly and focused on the right lapel, using a straight edge cutting tool on Photoshop it is possible to cut along the line of the lapel and eliminate the unwanted area allowing us to view the desired area more clearly. 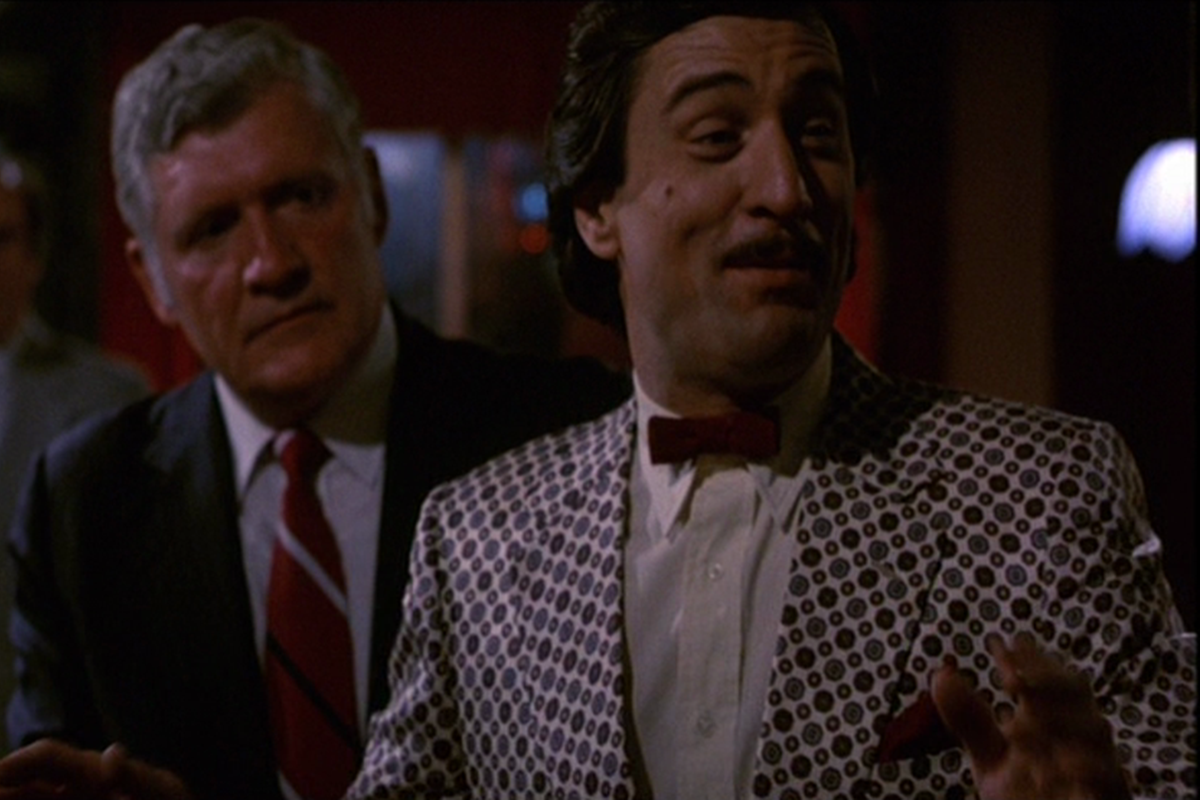 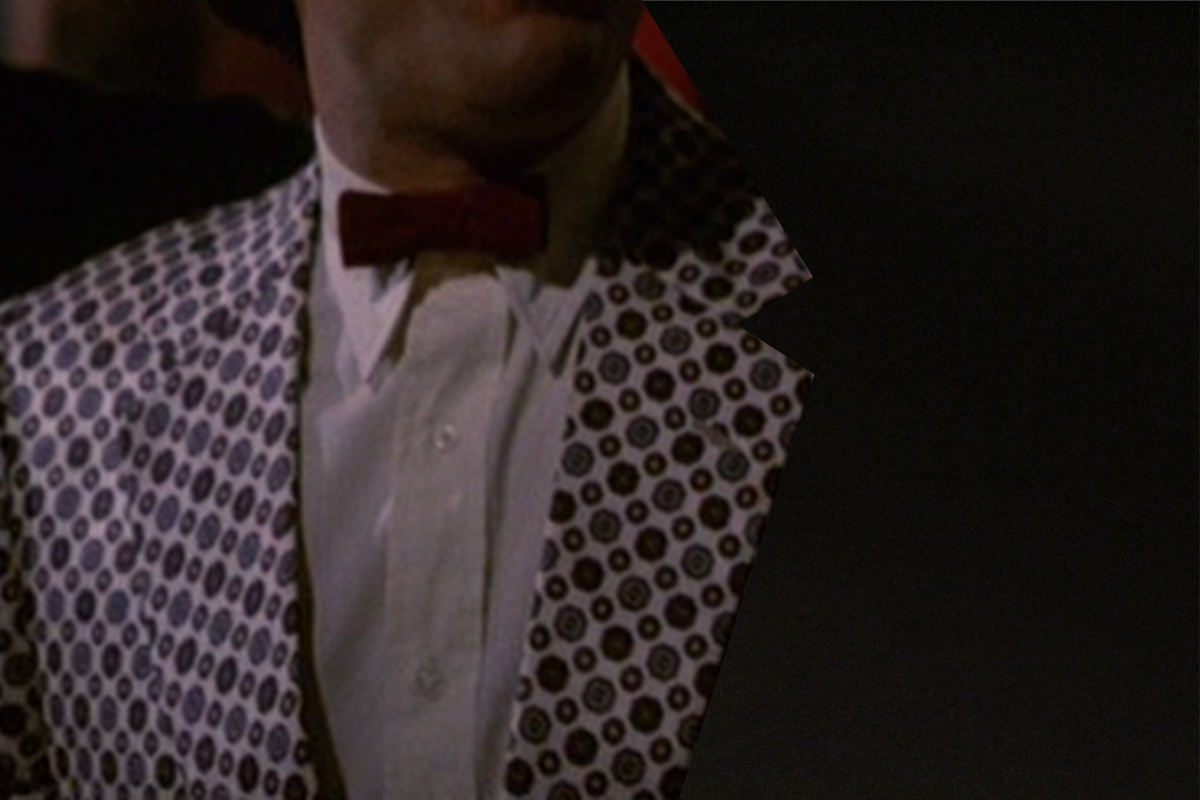 The above process is then repeated for the left lapel. 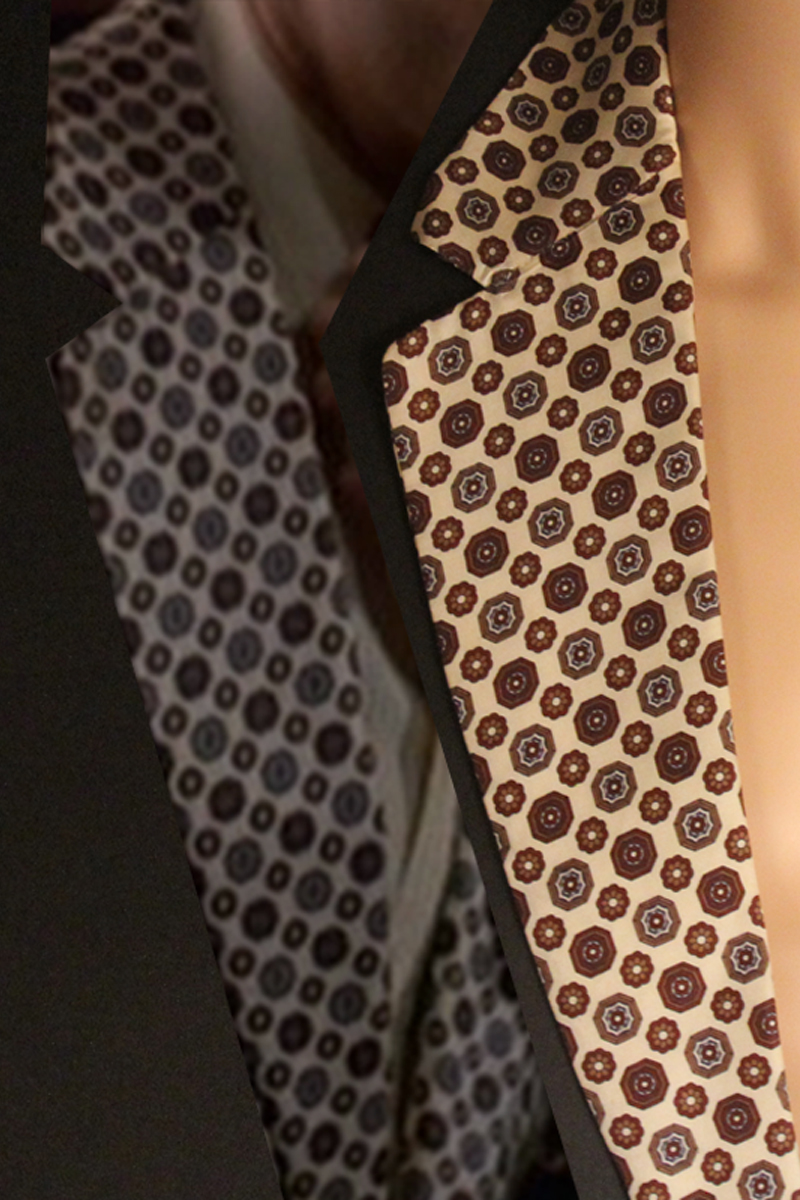 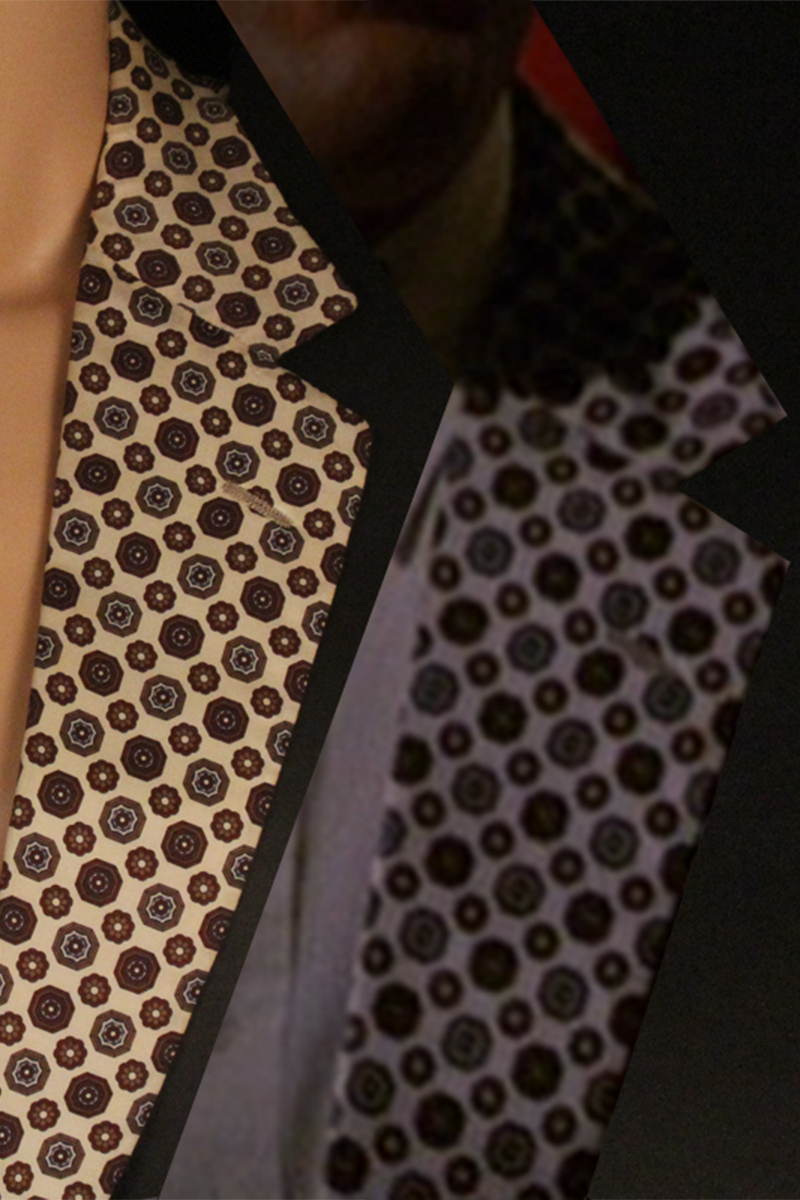 We can now compare the pattern on the jackets lapels clearly, overlaying one image on to the other so they appear side by side allows us to view the information more clearly. In doing this it quickly becomes very obvious that the jacket is indeed the one in the screen capture with the distinctive pattern matching on inside and outside edges of both lapels, the seam line at the top and the pattern around the buttonhole on the left lapel. 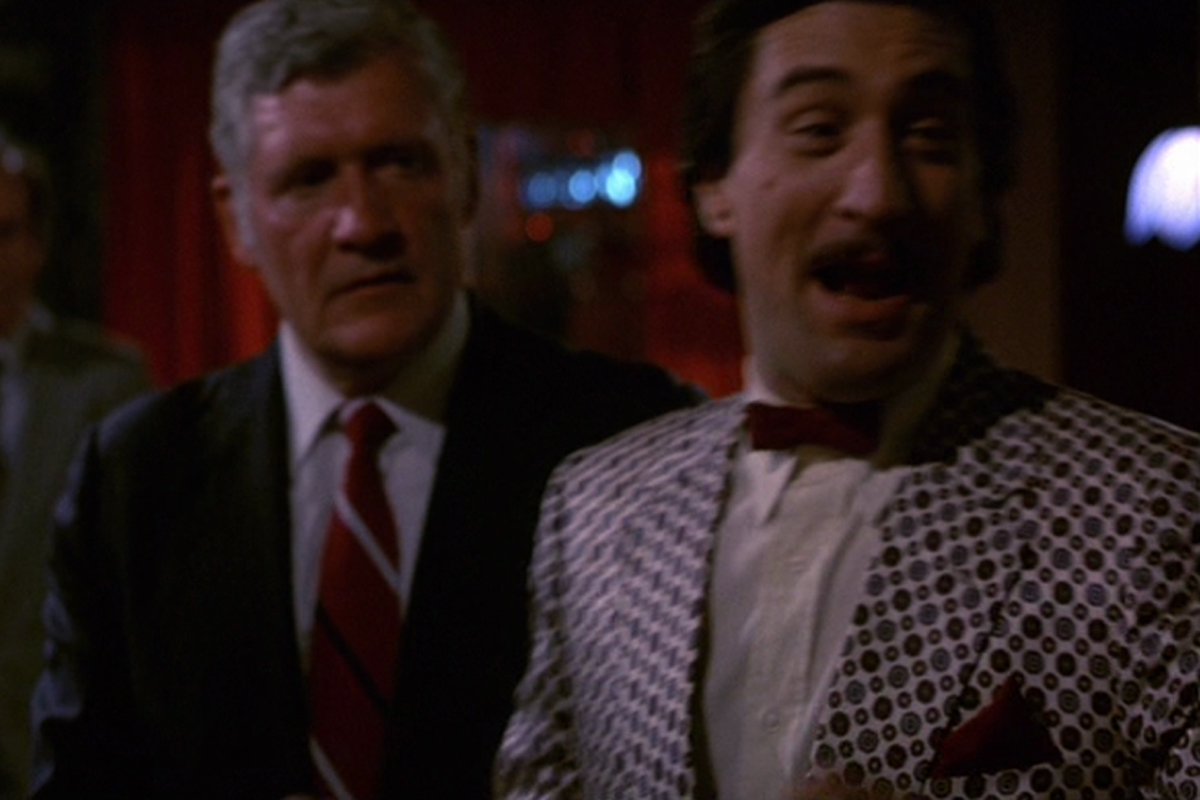 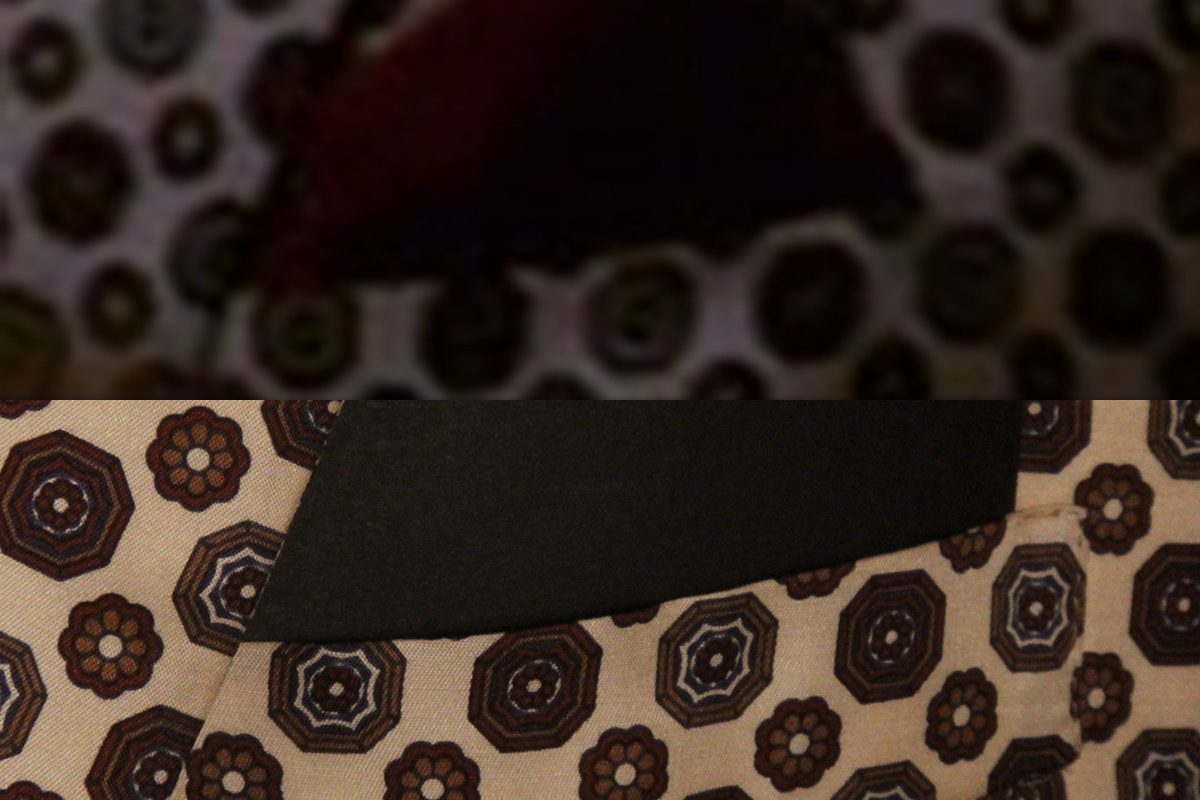 With the lapels a clear match lets move on to other areas of the jacket, after all we want to be absolutely certain and where screen matching is concerned you can never have too many positive comparisons between your piece and the one on screen. Fortunately De Niro wears a red pocket square in the movie which makes it very straight forward to pick out the pattern along the cut of the pocket, once again we use a black background to more clearly define the pocket edge and the off straight cut of the pattern matches perfectly. 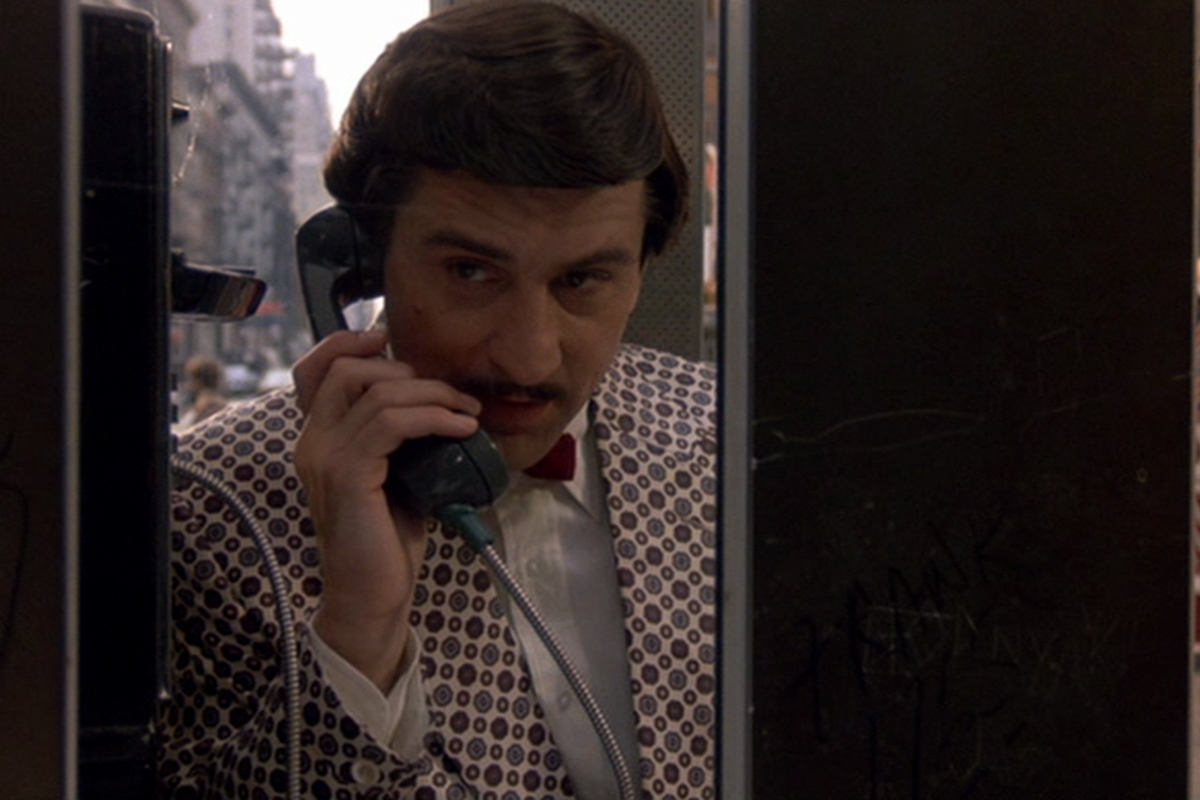 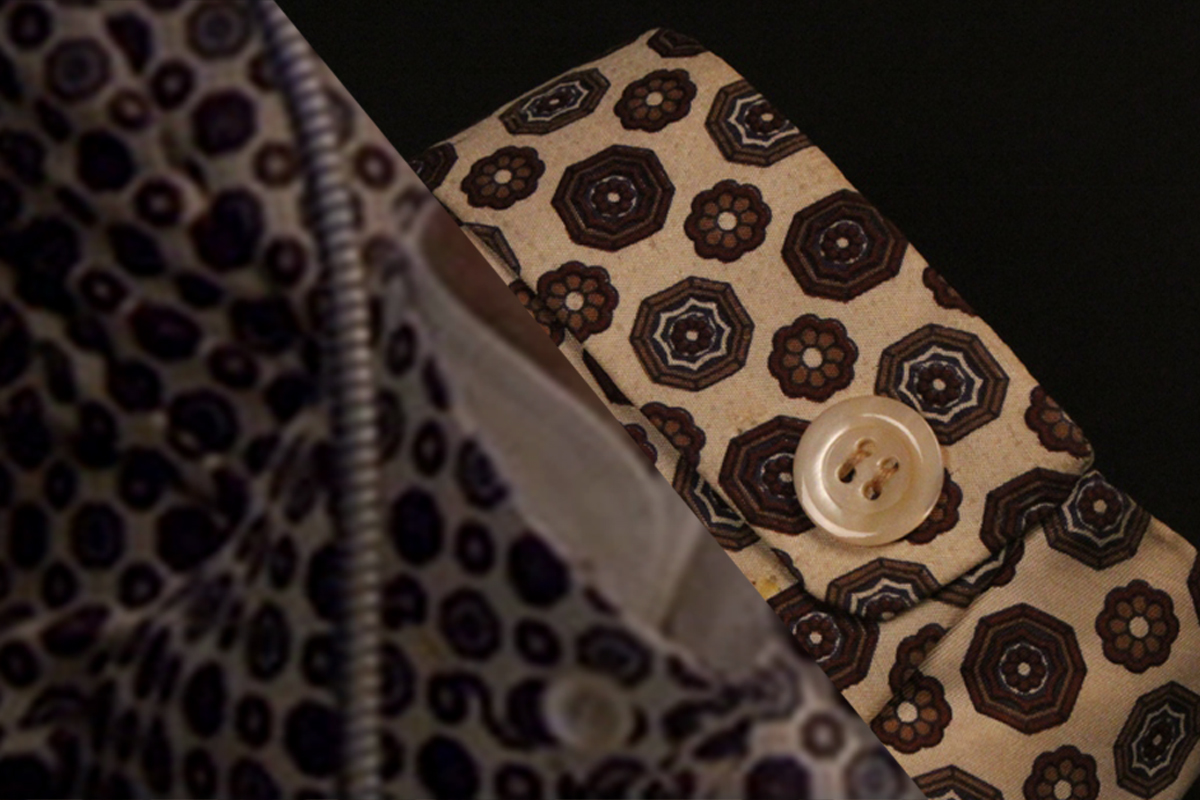 The scene in the movie where Pupkin is on the telephone affords us a fortunate and clear shot of the right had cuff of the jacket. With this enlarged and compared to the jacket it is once again a very clear match along both edges off the cuff with the button placement being perfect. 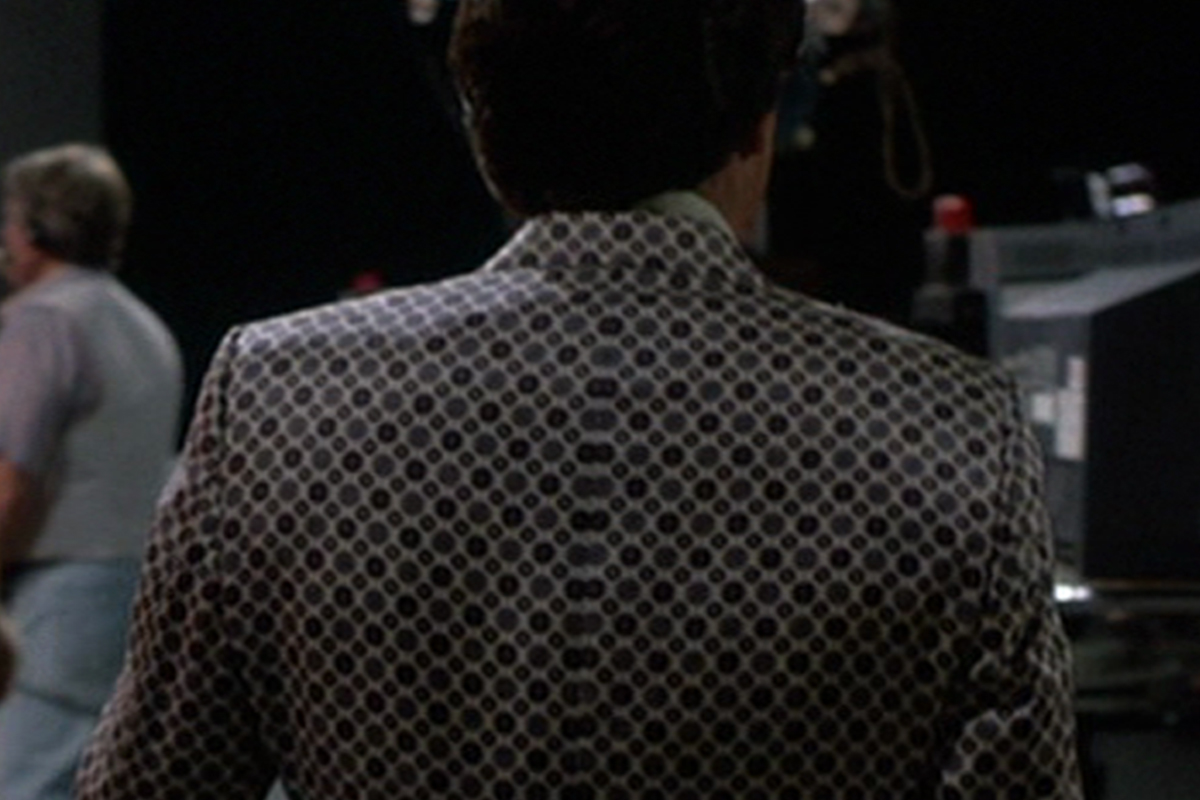 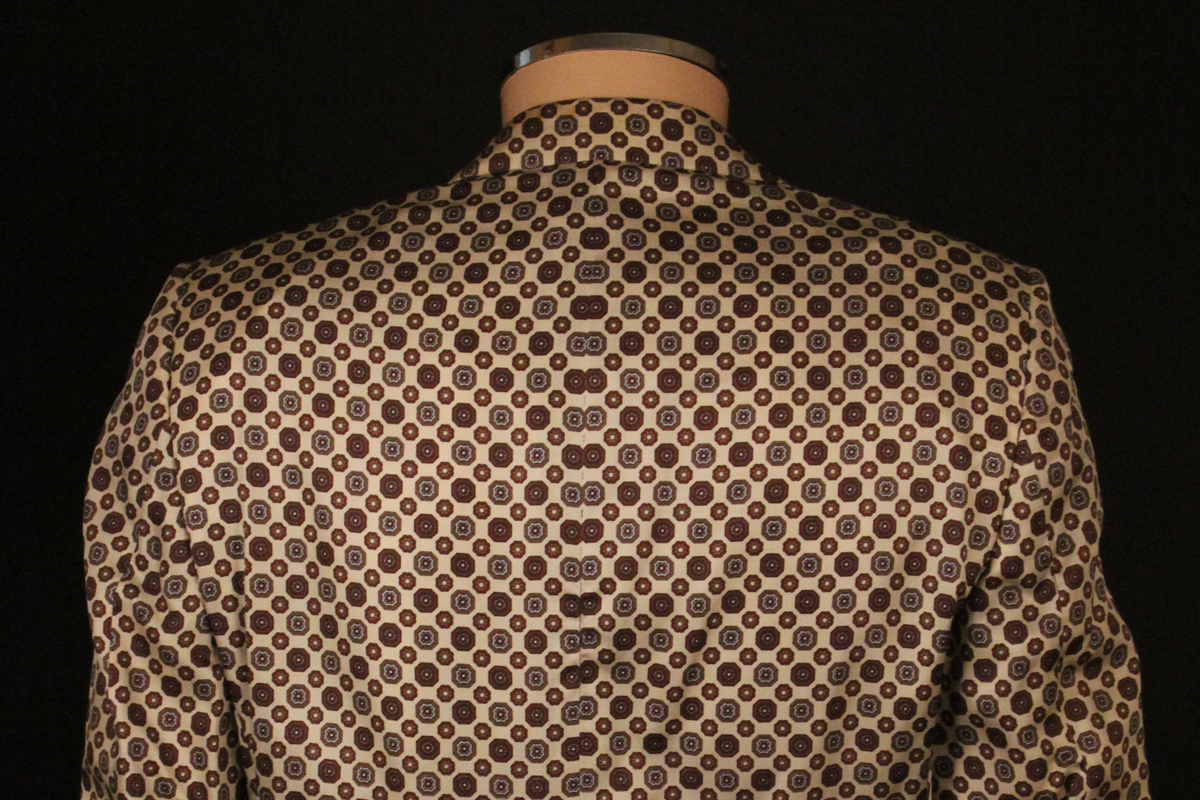 Finally we take a look at the rear of the jacket where it is clear that it is once again a perfect match, note the pattern where the two panels meet to form the seam in the middle with the right hand panel very marginally higher than the left and the pattern along the back of the collar.