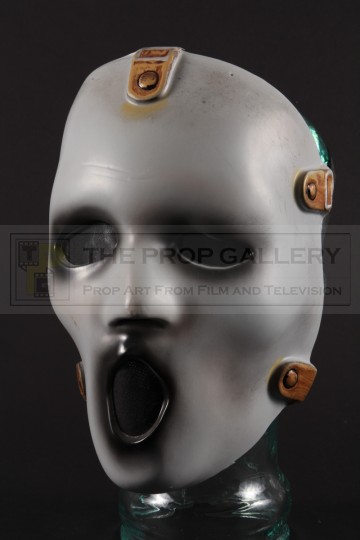 An original mask used in the production of Scream, the television series based on the slasher film franchise of the same name.

An original mask as worn by the Lakewood Slasher, this design moving away from that of the movie franchise and reportedly intended to be evocative of those worn by Michael Myers and Jason Voorhees in the Halloween and Friday the 13th franchises. Constructed from grey vacuum formed plastic the mask features applied black netting to the eyes, nose and mouth with painted strap ends to the extremities and is paint weathered, significantly so around the facial features, the mask also features an elasticated strap which goes around the back of the head and interestingly is is actually two masks glues together, this in order to make the piece more rigid.

An instantly recognisable and highly displayable artefact from this well received series.