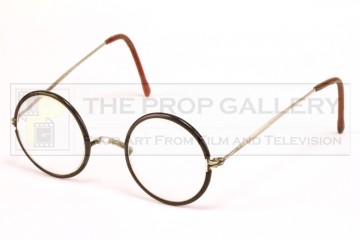 An original pair of glasses used in the production of Schindler's List, the 1993 historical epic directed by Steven Spielberg based on the real life events of the Holocaust.

These spectacles were worn on screen by Anna Mucha as Danka Dresner, the little girl in the round glasses who is tracked throughout the picture. The vintage glasses feature metal frame work with plain glass lenses so not to impair the vision of the actress. They remain in good vintage and production used condition with some wear from age and use, generally fine.

A rare and displayable artefact from this critically acclaimed masterpiece which is frequently considered one of the greatest pictures in the history of cinema.