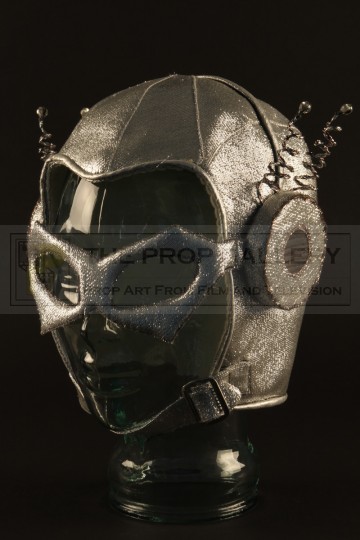 From the season three episode Future Boy broadcast in March 1991 this is the original space helmet worn on screen by Scott Bakula as Sam Beckett as he leaps into Kenny Sharp, an actor on a children's science fiction show. Visioned by series costume designer Jean-Pierre Dorleac the custom made helmet is constructed from silver lamé fabric and features an integral eye mask, adjustable chin strap and ear donuts with metal antenna and glass tips. To the interior the piece features a Harry Hatz makers label which is hand inscribed 'SCOTT BAKULA' in pen.

The helmet remains in near perfect production used condition with no noticeable damage, obtained by The Prop Gallery directly from costume designer Jean-Pierre Dorleac who retained it following filming and confirmed that this is the only helmet ever created for Scott Bakula.