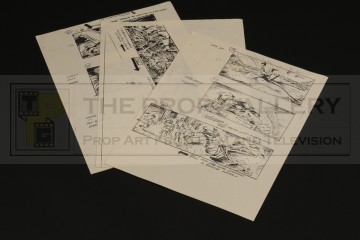 These storyboards are production issued copies of the original artwork created by Industrial Light & Magic illustrator George Jenson. The sequence consists of three pages which depict the scenes as Princess Leia (Carrie Fisher) strangles Jabba the Hutt. The various illustrations feature a number of notes relating to the scenes and camera movement.