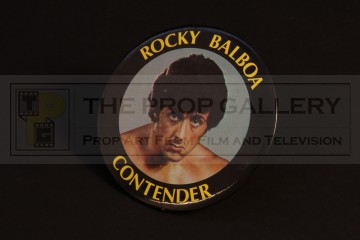 An original prop used in the production of Rocky II, the 1979 sequel starring Sylvester Stallone.

Badges such as this were used by members of the audience in the climatic fight between Rocky Balboa (Sylvester Stallone) and Apollo Creed (Carl Weathers). The oversized badge features the likeness of Stallone as Balboa with his name 'ROCKY BALBOA' printed above and 'CONTENDER' below. To the verso the badge features an Achievement Badge & Trophy Co period sticker, the company who produced the badges for the production.

The badge measures approximately 4" in diameter and remains in generally excellent vintage condition with only minor tarnishing to the verso, overall fine.

A highly displayable artefact from this classic sporting drama which requires no introduction.