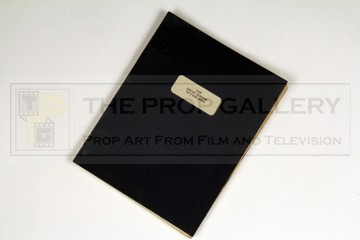 An original script from the production of the 1975 musical comedy horror The Rocky Horror Picture Show starring Tim Curry and Susan Sarandon.

This production used script is dated 18th July 1974 and consists of 88 type written pages in addition to the title page which is bound within a wraparound cover of dark blue card. The script features a quantity of yellow revision sheets throughout which are undated and parts of the script marked with black pen. The rear of the back page is inscribed F/S, 16TH JUNE, ROYAL COURT, which is a reference to a showing of the musical at the Royal Court Theatre in London which presumably was attended by members of the production.

The script remains in excellent condition throughout with some light edge wear prom production use.

A rare example of original material from this highly regarded cult film.