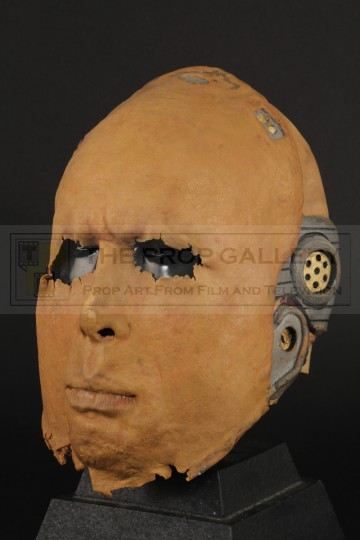 An original mask from the production of RoboCop, the 1987 action picture directed by Paul Verhoeven.

This mask was custom made by the production for use in the scene where RoboCop (Peter Weller) is crushed by girders dropped by Leon (Ray Wise) in the wrecking yard for which a dummy was used. The mask is constructed from latex rubber from a lifecast of Weller and features robotic detailing to the ears with a bullet wound to the forehead from the shot fired by Clarence Boddicker (Kurtwood Smith) early in the movie. To the back of the mask is a split with attached velcro allowing it to be worn and some foam latex detail which is now largely absent.

The mask is presented on a custom display which stands approximately 13" high, it remains in good vintage condition exhibiting some minor paint wear with hardening to the extremities such as the eyes, nose and chin but generally stable.

An instantly recognisable and displayable artefact from this highly regarded genre classic.