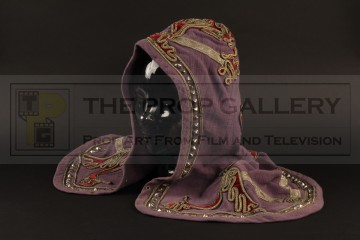 This hood was custom made for the production by Angels The Costumiers for Kevin Costner in his role as Robin of Locksley. Constructed in a thick rough and textured cotton the mauve coloured hood is heavily decorated with applied metal stud work to the edges and red detail sections in velvet dressed with decorative braiding. The costume bears an Angels The Costumiers label to the interior seam.

Although near identical in construction and of very very similar design upon inspection this hood would appear to have been a production made backup and not ultimately seen on screen. The hood remains in excellent production made condition with only minor traces of oxidisation to some of the metal studs.