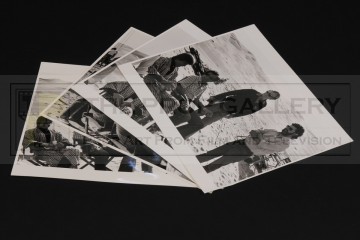 Behind the scenes crew photographs

Behind the scenes photographs from the production of the 1983 science fiction picture Return of the Jedi, the third instalment of the original Star Wars trilogy directed by Richard Marquand.

These photographs were taken on location in Buttercup Valley where filming of the sail barge sequence took place in spring 1982. This lot consists of four vintage black and white 10" x 8" photographs of various crew members on location, namely George Lucas, Mark Hamill, producer Howard Kazanjian and co-producer Robert Watts. These images are believed to be unpublished and originate from the collection of second assistant director Michael Steele.

The photographs remain in excellent vintage condition exhibting miniscule edge wear and toning one with small pinholes to the corners, overall very fine.

A fine behind the scenes glimpse from one of the most influential and highly regarded franchises in cinematic history.