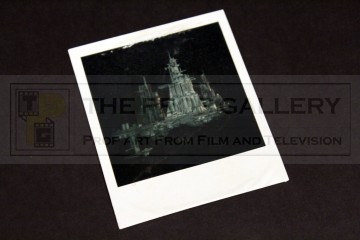 An original polaroid photograph from the production of the 1979 science fiction classic Alien directed by Ridley Scott.

Taken on production for reference it shows the original refinary platform model that was constructed by legendary model maker Martin Bower. This polaroid was taken by Brian Johnson who won an academy award for special effects on the film and it was obtained from his personal collection. It is stamped on the reverse with Brian's personal stamp which reads BRAY FILM STUDIOS, PINEWOOD STUDIOS, SPECIAL/VISUAL FX, ATTN BRIAN JOHNSON, to the right of the stamp it has been hand signed by Brian.

Measuring 3 1/2 by 4 1/4 inches and in fine condition with light signs of age related wear.